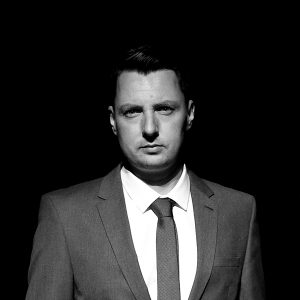 In the early nineties of the 20th century, in an era when electronic music slowly began to change the world of music itself, Maurice Pinkster, alias Cubic Nomad, started his musical journey. Infected by the house music of the time he started buying records in his hometown Dordrecht. This enhanced his passion even more and thus the love for producing was born. Within the same city of Dordrecht, which lit the torch for his musical passion and desire, he got his first sublabel. In the year 2001 he restarted Fix records which he continued until 2005. The label Symp.tom was born and Maurice became a part of it under his new name The Relic. In 2011 Maurice ressurected his own label Dark. Descent. which was orginally started in 2006. The industrial technoid alias Cubic Nomad unleashed its first release on Dark. Descent. called ‘Holy War’, a technoid and industrial pounder which obliterated many a dark and alternative dancefloor around the world. Following this came a grand release in the form of an album named ‘Light Errant’ which harbored a wide variety of alternative electronic styles ranging from techno, trance, IDM, industrial, ambient and hardcore, all mixed into an single aural electronic force. Tracks like ‘Walker’ and ‘Paradox Lost’, formed the fuel for many a Dj and shook many a crowd, both litterally and mentally. The sound of Cubic Nomad cannot be contained within a single box, or any type of box for that matter. Still it remains recognizable and effective at the same time. Beside this industrial technoid style of Cubic Nomad he also produces for Noisj., on their sub-label Dream Machine. An experimental yet emotional journey within the realms of Trip Hop, Downtempo, Soundscapes are to be found here, coming forth from the bright and varied musical mind of Cubic Nomad. As testament of this brightness was his latest album ‘Earth 2’, carrying the conscious message about saving the Earth from pollution, abuse and climate change before it’s too late.