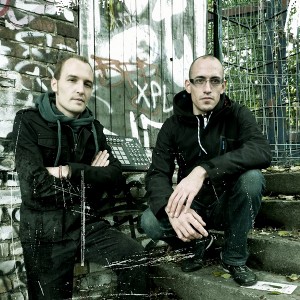 Densha Crisis is a Berlin-based formation.
Everything started when its two members (Alex and Fabien) met in high school and went to their first free parties around year 2004. The unique, precise, raw and agressive, but as well dancing sound of hardcore immediately captivated their attention and sensitivity. They started to deejay and to organize small parties which quickly grew up into event, the best medium to spread their predilection style.
Pushed by the will to improve themselves and after several years behind the turntables , they reached their abilities and began to produce a dark, raw and loud hardcore. In 2009, they finally chose to go to Berlin: the former divided city surrounded by industries and old factories became their new landscape for inspiration.
Since then, Densha Crisis spend their time creating sounds with one unique goal: always pushing a bit more their ressources without making compromises.