Into The Dark Lands – “Are friends electric?”

Into The Dark Lands – Are friends electric? 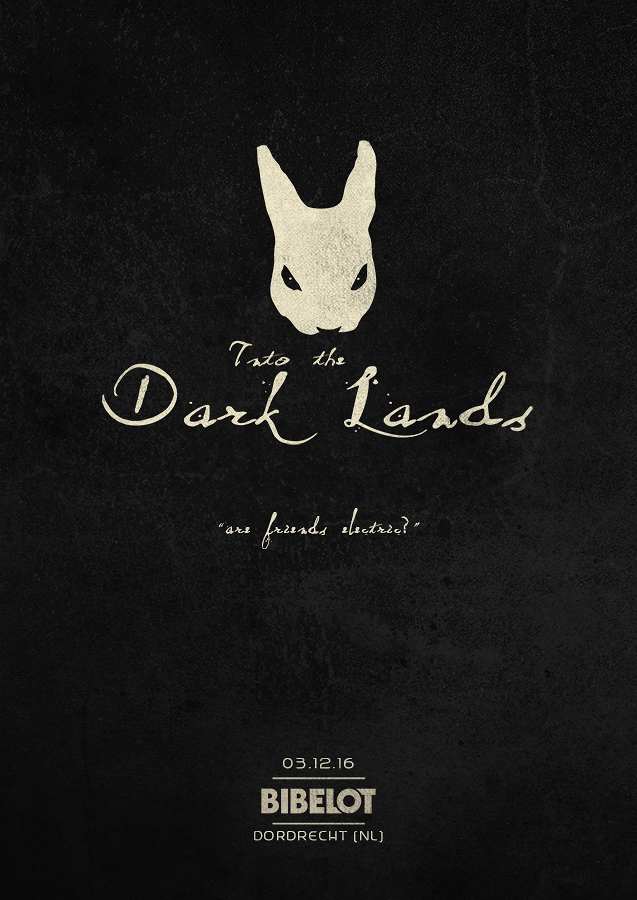 “Strong and dedicated, she had pursued her quest for enlightenment. But after all those years of struggle, she wouldn’t be feinted anymore. Happiness lay within, not in a treasure chest, that much was clear. With a joyous heart, she hurried home – into the dark lands!”

With “Into The Dark Lands”, the well-established party concept by Dark. Descent. will return on 3 December – with plenty of changes: While having sailed under the Noisj flag so far, it would nomadically roam various locations (and festivals) in the Netherlands, Belgium and Germany. Now the party will dock at the very home port of Room 23 Music, in the historical town of Dordrecht, just a stone’s throw south of Rotterdam, offering a perfect infrastructure.

Under the management of Dark. Descent. mastermind The Relic there will be a night with a unique sound in partyland, six artists covering the sub-170bpm-range of doomcore, darkcore, industrial techno and other sinister, noisy and rhythmic styles, eclectic in their approach, but unified in their attitude. To those who like their music dark, raw and rhythmic, “Into The Dark Lands” promises a festive day, with a potential to cross over the narrow boundaries of genres and styles.

The venue is Bibelot (Energiehuis), simply spot-on, a disused power station from the heydays of industrialization, now transformed into a highly atmospheric party location catering every need of the contemporary punter.
Into the Dark Lands, legendary for its great vibe, a family-like bonding of artists and visitors, it’s time to answer the question: Are friends electric?

INTO THE DARK LANDS
“Are friends electric?”